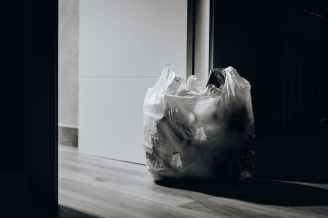 I recently posted about my time in a hotel room and the lights not being on when I got there after dark. There are several other things about the experience I want to talk about, but I didn’t want to do it all at once. Let’s savor the experiences, shall we?

Anyway, the room was pretty clean. Maids at the hotels, for the most part, do a pretty good job. But there is one thing that they do that I am not sure if it is a training thing, or just personal thing they do to irritate guests…

Ever notice the garbage can liners are tied so tightly that you can hardly get anything to go in them? And then when you push an item into it, it breaks the liner or just causes it to come off altogether?

In this case, every single garbage can liner in the room was so tight that you couldn’t get anything into the cans. Stuff literally just sat on top of the can! I tried to push one item into the can, thinking the liner would open up a little and allow the item to go into the can. Nope. No such luck. It just pulled the whole thing loose. Now there was no point to have a liner in the can at all.

Anyone know? Do they do this on purpose? I have noticed this in several hotels now. It must be an industry thing, but why?

Don’t be that guy.

Or even that one.

What is with people and leaving their trash cans or recycle cans (or all their cans) out on the road after pickup? I mean seriously. Is it that much work to put your cans away?

Don’t be that guy.

Take in your can(s).

If you’re out of town, arrange for someone to do it for you. Otherwise, you really have no excuse. You have to drive or walk by it when you return home so take care of it!

Oh, and while you’re at it, don’t be that guy that lets the animals or birds spread your garbage all over the place either. That’s just irresponsible and lazy.

Do you have any neighbors that do anything that drive you nuts? What do they do to send you over the edge?

Photo by George Dolgikh on Pexels.com

Well, folks, the stockings are down and the presents opened. It was chaos from the start and there is a ton to do now that all are gone.

Not sure about your family, but mine appears to just swoop in to open presents and consume food before jetting off to other places and people to visit, which leaves a tornado of debris scattered about the house and hours of cleaning after the fact. That isn’t to say that there weren’t also hours of prep before everyone even showed up…so when taken all into account there were probably four times as many hours preparing for and cleaning after than there was actual time spent with family.

Don’t get me wrong, time spent with family was great and the joy did finally come as the smiles and laughter filled the room. It did finally come. BUT, it was soon lost in the time spend cleaning floors, dishes, the fridge, taking out the extra 100 pounds of garbage, and putting the furniture back where it belongs.

Does anyone else have that feeling after Christmas where the “What did we just do?” dread of having to put life back to normal appears that it will take an inordinate amount of time? Like maybe you’re the only one that will be working into the wee hours of the night just so there will be some resemblance of normalcy the day after?

Photo by Emmet on Pexels.com

If you are a home owner, you have probably done this at least once. My guess is probably more than once. What is it, you ask?

You’re laying in bad dead asleep. Blissfully not a care in the world when you are awakened by a familiar noise. You listen for a second and then realize that familiar noise is the garbage truck up the street. IT. IS. GARBAGE.DAY. and you forgot to put out the can(s)!

So, you bolt from bed, desperately trying to clothe yourself (or maybe not, if you’re that kind of person) and put on some sort of foot covering as you awkwardly and progressively work your way through the house to the cans that need to be taken to the street.

Now, if you are quick, hopefully you made it to the street before the truck comes rambling up to scoop up your cans as you stand there in the driveway or next to the road, disheveled like you just randomly dressed in clothes you found in the dumpster behind the thrift store. But if you are not…well, my friend, you are just SOL.

Maybe, just maybe, you get lucky and make eye contact with the garbage collection officer and he acknowledges you and comes back to empty your can. That is a glorious day and the victory feels like you should just stop there for the day and not risk further misfortune.

But if you are not that lucky, you get the walk of shame with a full can and another week of stinky garbage. You might as well crawl in the can and wait. There is no coming back from this defeat.

So, don’t be that guy. Get the garbage out and hail to the garbageman. 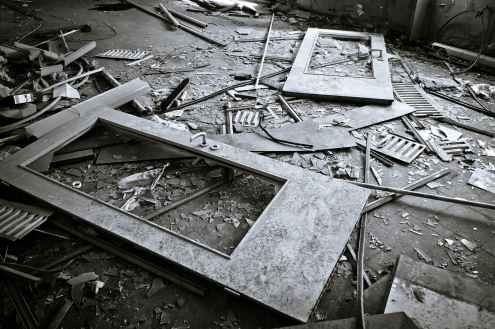 Apparently it is now acceptable (not really but people must think so) to leave your garbage wherever the hell you want. Forget the garbage can. Forget taking it to the dump (or whatever you call that place that collects garbage). Forget being a rational, decent person, and taking care of your crap yourself.

No, now all you have to do is haul your unwanted crap (i.e. garbage) to the edge of the road (i.e. sidewalk) or the corner of your property, or worse – in front of someone else’s property, and put a sign on it that says “FREE”.

What kind of conversation does one have to have with one’s self that would make this acceptable? “Good lord, I have a bunch of crap. Actually, it’s just garbage, but I don’t want to take the time or effort to dispose of it properly so I think I’ll just drag it over *scanning* there and put a FREE sign on it. Surely, someone will see this pile of crap and take it because it is, after-all,  free.”

Have you ever had that conversation with yourself? If your answer is anything other than no – you’re a damn idiot! STOP putting your crap out in the hopes that someone will take it. It is is garbage and you don’t want it, it is garbage and no one else wants it either!

I literally saw an abandoned six-person dining room table and 5 chairs sitting on the sidewalk in front of an open field, within the city limits. Yes, that’s right, some moron drove their truck to the side of the road and set up the dining room furniture on the sidewalk with a sign that said “Free”. Like WTH, right? I’ve seen couches, chairs, freezers, fridges, stoves, cribs, cars, weight benches, exercise equipment…the list is never ending…

And then there are those people who drive to the end of a gravel road or drive out the middle of nowhere on a dark night and dump their garbage in a pile like they are at the damn dump! Seriously? When did nature become your freaking personal garbage can? GRRRRRRRR!!!! Don’t even get me started….

Come on people, get your sh*t together and stop acting like the world is your oyster – ‘cuz it ain’t! You gotta share it with the rest of us and the rest of us are getting pretty tired of your selfish crap. 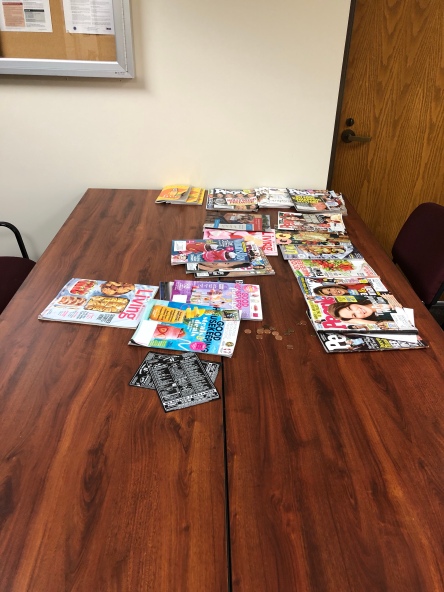 Why does there need to be 90 (ok, exaggeration) old magazines in the lunchroom? Why do they need to be spread out on the table like a bad potluck of 12 different kinds of spaghetti? This isn’t a dumping ground for your magazines and flyers.

Why doesn’t someone get rid of these things and just move on? Better yet, if I just tossed them would anyone mind?