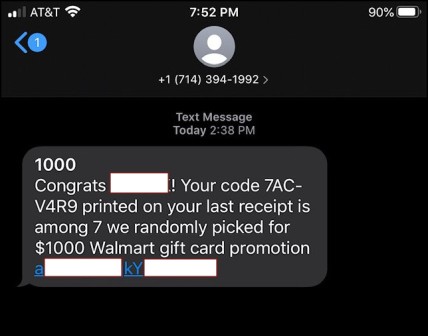 Watch out. Someone is trying to jack your stuff and it ain’t cool.

More specifically, after doing a little research (not the info is a little old, but still applies), they are trying to jack your wallet via your phone bill. This is actually called “SMiShing.” Walmart has a whole page about different scams they have seen.

The scary thing here is that the text message had my correct first name and middle initial, I have used the Walmart app and have an online account, and I have recently shopped at the store. So, it would appear legit at first glance.

I am a suspicious person (as in I don’t trust easily) so I didn’t just click on the link they included in the text. However, if you aren’t a suspicious person, you may have just gone right ahead and clicked to see what it was all about – even if you didn’t intend on following through with anything once you got there. Don’t do it.

I have no idea who or what the phone number at the top of the screen shot is. Didn’t call it, but if you are brave you could do it if you like and let me know what happens. I don’t advise it, however.

People who try to scam other people are losers. They are big time jackwagons. They are (insert desired word here). Whatever you want to call them, it just ain’t cool.

Not even a little.

Sound the alarms! Everyone to the streets! Crisis! Crisis! Oh my! Let the fear-mongering begin.

Precedent can be dangerous. The Supreme Court has shown this in the past and is showing it again in the present. This isn’t necessarily a bad thing.

A court can’t rely solely, or place too much weight on precedent (past SCOTUS decisions), or things can’t/don’t/won’t change for the better.

If the Supreme Court never breaks with precedent, then it isn’t actually doing it’s job and would just continue to “pile on” bad past decisions.

Think of it this way – as a parent, are you allowed to change your mind in how you parent a child if a decision you made previously didn’t have the intended outcome? What if you didn’t have that ability or you were required to maintain the bad decision because that was the way it was always done in the past? Yeah, I don’t think any of us would like that.

The Supreme Court should be no different. Sometimes, the court has to fix its own bad decisions from the past. Prime example: Plessy vs. Ferguson (1896). The “separate but equal” precedent was never a good decision to start with and everyone knows for all intents and purposes that it would not be applied equally. For the next 58 years there were lots of challenges to Plessy and that precedent. The court held with precedent. It wasn’t until 1954 that the court finally broke with precedent and decided that “separate but equal” was not equal in Brown vs. Board (1954), correcting a previously bad decision.

Those who protest about breaking precedent now, in essence, are arguing again correcting previously badly or erroneous interpreted decisions. Is that what you really want from SCOTUS? To never fix their errors?